Oliver Cunliffe, former LGS student who left us last year for acting college, features in a new TV Sci-Fi series called ‘Silverpoint’, as one of the lead characters Louis. Silverpoint officially aired on Sunday 6 March on CBBC and is available to watch via BBC iPlayer now.

We caught up with Oliver, to find out more about his past, present and future in the world of acting.

What have been the highlights of filming Silverpoint and being the lead character?
Filming and playing Louis has been an incredible experience. This was my first time in a TV show playing the lead character, meaning that I was required on set for 12 hours everyday within the 6 months we were filming for. Whilst it was exhausting at times, it was great fun and I loved every second (apart from the 5:30am call times!)

All filming took place in Northern Ireland, so I was away from home for 6 months. Although I missed my family (and dogs) I was well looked after, living in a house with other male cast members and having a brilliant chaperone. Due to covid restrictions, I was only allowed to socialize with other cast members, so we really became each other’s family while we were away.

The best thing about filming Silverpoint was all the stunts and special effects with it being a sci-fi adventure series, it meant that we used a lot of green/blue screens and improvisation. For example, when we filmed the dinosaur scenes, our eye line to react to the dinosaur was actually a tennis ball on a long pole. We also spent days and days filming the flying and teleportation scenes, being trussed up with support wires and suspended from cranes – this was one of the only times I didn’t mind if I made a mistake as it meant we go to do it again!

It was amazing to see the finished series with all the special effects and the VFX added when the show aired in March. Now, a computer game of the series has also been made and I had great fun voicing my character along with some narration and sound effects – although it is rather odd to see yourself in a computer game.

What are your reflections on your time at LGS and how LGS developed you as an Actor?
I have been very lucky to have had great teachers and coaches over the years supporting me along the way. The drama department at Loughborough Grammar School were brilliant. Mrs Bruton was always available for help and advice with my acting, and constantly encouraged me to take part in projects both in school and out of school. She introduced me to the amateur dramatic groups in Loughborough and over the years I’ve done several performances with them, including ‘Goodnight Mr Tom’, ‘Private Peaceful’ and ‘The Addams Family’ to name a few.

At school, I was Bugsy in the production of Bugsy Malone and was even asked to take part in the New Directors season in Year 6 that is produced for the Year 12’s and 13’s. Mrs Bruton nurtured and developed my talent over the years, and I will always be grateful for the time and energy she invested in me – thank you Mrs B! 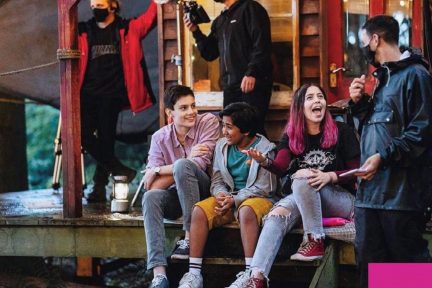 What are your future plans? Do you have any other projects lined up?

Series two of Silverpoint will hopefully be filmed this summer, again out in Northern Ireland, so I will be away again for 6 months but hopefully this time I might be able to come home for the odd weekend to see family and friends.

I am also supposed to be filming a new Sky One comedy series with Greg Davis at some point. This was originally meant to film during 2020 but due to covid it was put on hold. So, I am waiting to hear if this is going ahead.

To watch and find out more about Silverpoint, follow this link: https://silverpointtv.start.page/