Tributes from the team at Loughborough Schools Foundation in memory of a remarkable life of service and dedication.

We have opened a Book of Condolence for all those who wish to share their thoughts and memories. 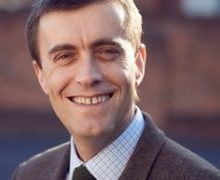 Like many people across the UK, the Commonwealth, and the entire planet, I met the news of Her Majesty Queen Elizabeth II’s death with a sense of shock, disorientation, and profound loss.

It should not be shocking when someone who has reached the grand old age of 96 dies. Yet, in this case, it is. We have lost our monarch of more than seventy years. Someone who felt like a rock of permanent and enduring values in an ever-changing and often confusing world.

I am sure we would all agree that Queen Elizabeth II exemplified values of duty, resilience, calm, and quiet common sense.

Above all, at the heart of the Queen’s character was an unpretentious yet profound Christian faith. This faith kept her rooted in an inner dignity through more than seven decades of passing fads, fashions, and upheavals.

I, and the whole Amherst community, join the nation and world in praying together in gratitude for the life and work of this most remarkable human being. 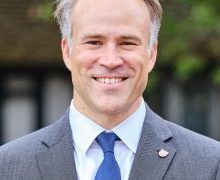 Her life was extraordinary, and her service to this country and to the Commonwealth immeasurable. She became Queen in 1952 at only 26 years old. Winston Churchill was her first Prime Minister. 14 others have come and gone during her 70-year reign. In all the shifting sands and changing tides that we have experienced in our lifetime, she has been an ever-arching presence. A symbol of unity and stability, of integrity, service, and character. For me and for countless others, she has always been a source of inspiration.

And yet she was not a just symbol, she was something much more than that – she was a person. A mother, a sister, a wife, a grandmother. She knew the same sorts of joys that we all do in our lives, and also experienced loss and knew the sting of hard times. For me, she represents the values of my grandparents’ generation, those that have become rarer, and yet, are more important than ever. She was kind, courteous, and took a genuine interest in others. Those things that make someone a good person regardless of wealth, class, or education.

I feel grateful that my time here on earth has overlapped with that of Her Majesty the Queen. I am grateful for her example, for her dedication and service. I will have fond memories of her Golden, Diamond, and Platinum Jubilees for the rest of my years. I will always remember watching her thoughtful Christmas speeches gathered round the television with family. And I will always smile when I remember her appearances alongside James Bond during the 2012 London Olympics and Paddington Bear earlier this year.

We are witnesses to the end of an era, the second Elizabethan age. 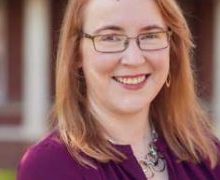 Above all, hers is a life defined by unconditional love, not just for her beloved husband Philip, her children, grandchildren and great-grandchildren but also for God and for her country. At the age of 21 she vowed to commit her life, however long or short, to our nation and she has remained faithful to us all for over three-quarters of a century. She symbolised the best of our nation and the best of ourselves. 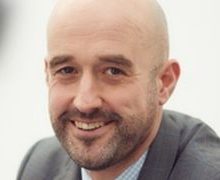 The school, our pupils, staff and parents, are deeply saddened by the passing of Her Majesty the Queen. Our thoughts, prayers, and heartfelt affection go out to all members of the Royal Family at this time of sorrow.

Her Majesty embodied many virtues, and will always be remembered for her selfless service, her warmth, and her gentle strength in leading the nation over seven decades. Her life was an example to us all, and she was a constant source of unity and reassurance throughout her life. 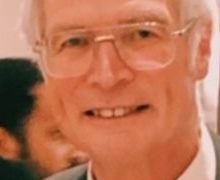 It was a truly memorable and special day.

Her Majesty visited the Foundation on Friday 28 June 1996 to open the new English and Drama Centre built to celebrate the Grammar School’s quincentenary. All 2000 pupils from the three Schools along with invited guests waited for her in pouring rain. After formally opening the building, she toured the building and met staff and pupils as well as listening to the School Choir.

Fortunately, the rain relented and she was cheered as she made her way through the Quad to the Hodson Hall where she listened to the orchestra before being formally welcomed by Headmaster, Neville Ireland. She then signed the ‘Burton Book’ before enjoying lunch in the Burton Hall. She then left, being cheered down Burton Walks by the pupils, for The Defence Animal Centre in Melton Mowbray after spending more than two hours at the School. 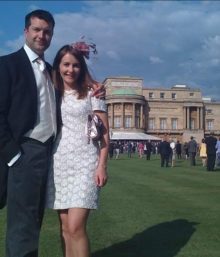 Our Headmaster, Dr Koch, spoke movingly in assembly the morning after Her Majesty the Queen passed away. He described her as “A symbol of unity and stability, of integrity, service and character…And yet she was not a just symbol, she was something much more than that – she was a person.” I count myself very lucky to have experienced these qualities first hand.

My first meeting with the Queen was when she came to Loughborough in 1989. As squeaky new first years in Dr Underwood’s form at LGS, I and my classmates lined the path on her visit to the university for a brief hello and handshake. Following that visit, we boys of 1U all wrote letters requesting her to visit the school for our Quincentenary celebrations in a few year’s time – the best (written by James MacDonald-Pearce, despite his awful handwriting) was chosen to be sent to the Palace, and the rest is history!

When the Queen duly visited the School in 1996 to open the new English and Drama building, I was by then in the Upper Sixth and had the honour of being Head Boy.  While my friends in CCF were being drenched by the torrential rain in the quad, I was cloistered indoors trying to calm my nerves at the prospect of calling for “Three Cheers for Her Majesty” and presenting the crystal vase that was the gift from the school. (Thankfully it was only afterwards that I found out that the catering staff were laying bets on whether I would drop it or not…)

Adding to the sense of anticipation was the knowledge that I would sit opposite Her Majesty throughout lunch, along with the Headmaster, the Chair of Governors, the Lord Lieutenant and their respective wives, and the Deputy Headmaster. My partner for the meal would be the Queen’s lady-in-waiting, the very warm and charming Lady Susan Hussey.

I need not have been nervous – the Queen was simply lovely. Asking probing questions about my career aspirations after school, she showed a really deep understanding of the selection and training process of the RAF, and was excited and enthusiastic about my plans to join Oxford University Air Squadron. She also revealed a very human sense of humour, spending much of the meal gently ribbing me about a practical joke that had been played on Mr Ireland that morning (involving a fax requesting kennelling and feed for a troupe of corgis), and suggesting I had been behind it all. She exuded gravitas and majesty of course, but the lady I remember at that lunch was all warmth, humour and humanity – and with a slightly impish glint in the eye. It may sound trite, but she positively twinkled. What a person, what an experience, and what a rare opportunity thanks to this fantastic school.

Also in the Hall as I croaked out ‘Three Cheers’ that day was my future wife, Lucy, then at LHS. We were lucky enough to see the Queen together once again, a decade and a half later, when we were invited to a garden party at Buckingham Palace on my return from a tour as a political adviser in Afghanistan. As I write this, Lucy makes a very poignant point – our new baby daughter and our two-year old son will grow up with no memory of this unique person who was our Queen. I find this sad. But I hope that as parents we can pass on some semblance of the integrity, service and character that our Queen has so amply demonstrated – and also her warmth and humanity.

Click here to add an entry in our Book of Condolence