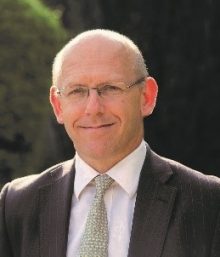 Simon Morris is a recently retired headteacher with over 30 years' experience in independent education. Educated at Ipswich School and St John's College, Cambridge, he initially worked for Arthur Andersen & Co before taking a PGCE at Christ Church College, Canterbury. He subsequently taught Modern Languages at Warwick School (where he was also Head of German) and The Leys School, Cambridge (where he was Head of Modern Languages and a Boarding Housemaster), before becoming Deputy Head at St John's School, Leatherhead. In 2008 he became Head of Kingswood School, Bath, where he remained until his retirement in 2020. He has experience of governance and trusteeship in a variety of both state and independent schools and is currently the Chair of the Education Committee at Queenswood School and a member of the Governing Body at Woodhouse Grove School. He is a former ISI Team inspector and a current senior leader appraiser with the Methodist Independent Schools Trust.

Simon is the Nominated Safeguarding Governor for the Foundation.

Simon lives in Derbyshire and is married to Caroline, a secondary school Modern Languages teacher. They have three adult children. His interests include sport (and particularly cricket, golf, rugby and football, the latter as a long suffering supporter of Ipswich Town) and literature (particularly Modern European).