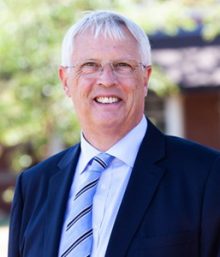 Alan was educated at Buckhurst Hill Grammar School, Essex, following which he read Civil Engineering at The University of Nottingham. He continued his studies there gaining a PhD in Engineering Surveying, and after a Research Fellowship joined the academic staff as a Lecturer in Civil Engineering. A long academic career saw him promoted to Head of the School of Civil Engineering, Dean of Engineering and finally Pro-Vice- Chancellor with responsibility for Estates, Infrastructure, Environment and Information Services.

During his academic career, as well as teaching a range of undergraduate and postgraduate civil engineering related topics, Alan’s research interest was in the field of Engineering Surveying and Geodesy, with a particular interest in the engineering and environmental applications of satellite positioning systems.

Whilst at School and University Alan was a keen cricket and badminton player, and Bridge player. He still holds the University’s staff cricket team bowling record of 9-26 against the University of Sheffield staff team!

Alan is married to Heather, who also worked for many years at The University of Nottingham in Information Services, and they have a son, Edward, who attended Loughborough Grammar School and is currently studying for a DPhil at Oxford University.