Congratulations to Ollie who has achieved another team gold at the Triathlete World Championships in Madeira, PORTUGAL!!

He shot exceptionally well, taking just 16 shots to achieve his 15 green lights on the course and for his swim the tide was out giving a nice surf into the shore to help his exit from the water. Strong running brought him home in 8th place individually. The top three Brits in his race made up the team, where Ollie, as 3rd Brit home, joined the other two on the top of the podium to receive their gold medals from the President of the International MP Union, Klaus Schormann.

There is no denying that Ollie has had a golden first season in the sport. He’s looking forward to working hard on his fencing over the winter to develop his pentathlon skills. But first a rest!

When asked, “did you sing on the podium?” he responded, “I sang God save the King in my head as I was on the podium, but I did not sing it out loud because they played pop music instead!”

Congratulations to Ollie for such an outstanding performance. 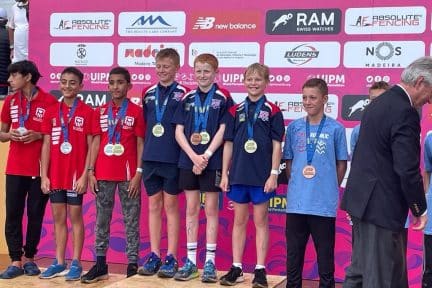 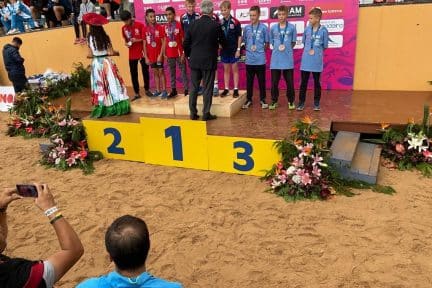