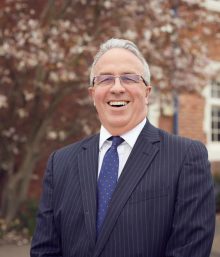 Kevin is a highly experienced company director having held senior positions within a number of listed and private companies over many years.
He is a Chartered Accountant, Member of the Institute for Turnaround and graduate of Nottingham University.

Having qualified with Price Waterhouse in the 1980’s and progressed with Spicer and Pegler, he then held the positions of Group Finance Director or Group Chief Executive with Hazlewood Foods plc, The BSS Group plc, Low & Bonar plc, and The AEA Technology Group plc. and until recently was Group CEO of DK Group Investments Limited based in Rugby. He has also acted as an independent executive in restructuring situations and is currently working with a number of smaller private businesses.

Kevin has also acted as a Governor, including a number of years as Chairman, at two maintained schools.

Originally from Nottinghamshire and now living in Staffordshire, Kevin is married and has 4 grown up children (including a son who attended Loughborough Grammar School). Interests include all sport but especially Rugby Union, clay pigeon shooting (badly!) walking and wine.