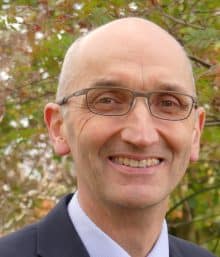 Andy is an experienced business professional who has worked in the aerospace industry for over 25 years.

After graduating from the University of Nottingham with a degree in Mathematics and Statistics, Andy qualified as a Chartered Accountant with Deloitte and Touche. He then relocated to the East Midlands and joined Rolls-Royce plc, where he currently works in the company’s head office finance team. During his career, Andy has held a number of senior management roles including holding directorships of UK and overseas subsidiary companies. He has also held a number of voluntary posts including being a trustee and Executive Committee member of a company leisure club. In addition to being a member of the Institute of Chartered Accountants in England and Wales, Andy holds Association of Corporate Treasurer qualifications.

Together with his wife and another parent, Andy administered one of the school bus services on a voluntary basis for eight years.