We were extremely proud to see Fairfield and Loughborough High School alumna Captain Amy Cooper (FFD 2000, LHS 2009), second in command of The King’s Troop Royal Horse Artillery, selected to lead the gun carriage carrying the Queen’s coffin from Buckingham Palace to Westminster Hall and in Hyde Park for the Queen’s funeral.

Amy shared, “I felt instantly extremely privileged, proud and so lucky be able to pay a final tribute to Her Majesty the Queen in this way. I think it’s a testament to how well-loved she was by all of the public, all of the United Kingdom and all of the world. It’s testament to her selfless 70 years of service to our country. I am nervous, but I am well prepared, well-rehearsed and I just want to be able to do my very best, be professional, be dignified on this sombre occasion and make sure that I do my regiment proud.”

King’s Troop, a unit of about 160 soldiers with an equal split of men and women, has one of the most important ceremonial roles in the British armed forces. Amy joined the King’s Troop three years ago and was initially responsible for 30 soldiers and 20 horses. She became second in command of the regiment in July 2021.

Amy is riding Yogi, otherwise known as Lord Firebrand, a veteran parade horse often sought out by commanders for his experience. Lord Firebrand is 14 years old and has been on “countless parades”, including the Queen’s Birthday Parade. 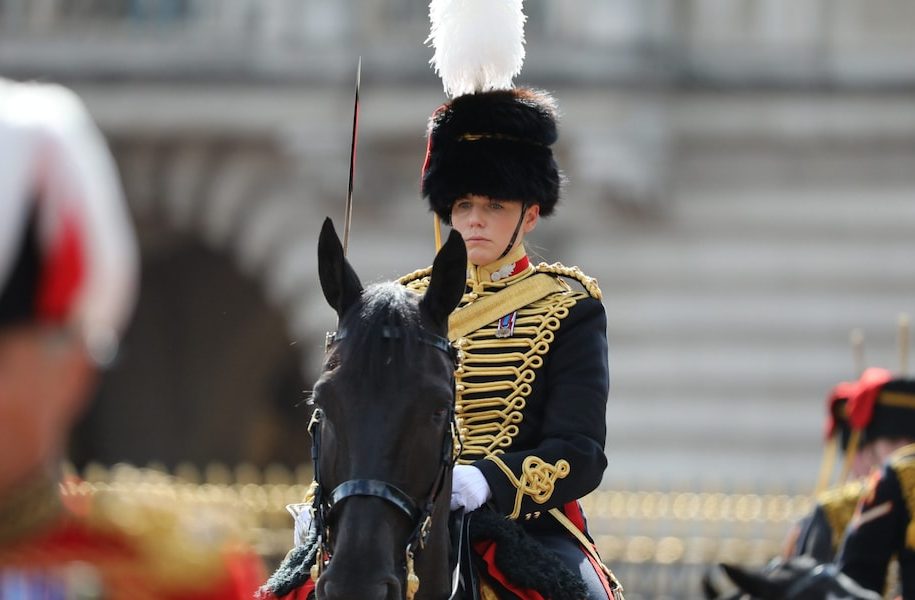 Minute guns were fired from Hyde Park by The King’s Troop Royal Horse Artillery while the coffin moved in procession to the Palace of Westminster — one round every minute for the duration of the procession.

Their six 13-pounder quick-fire guns, built between 1913 and 1918, all of which have seen active service in the First and Second World Wars, are used regularly for royal salutes in Hyde Park, Green Park or Windsor Great Park for State Occasions and to mark royal anniversaries and royal birthdays. Each gun and limber weighs 1.5 tons and, with the team, is approximately 54 feet long.

The procession marched at a pace of 75 steps per minute, which is specifically reserved for funerals and ensures it keeps time with the slow pace of the gun carriage. Ordinarily troops would either do a slow march of 60 beats per minute, or a quick march of 110 beats per minute.

Royal protocol states that within six hours of receiving the official notification of the monarch’s death, King’s Troop must fire the death-gun salute in Hyde Park unless, as in the case of Queen Elizabeth II, the death announcement comes after 5pm. In this instance, the salute was fired the next day. “Nothing could start for Operation London Bridge until that death-gun salute had been fired by the King’s Troop,” Capt Cooper said.

The Troop then had one night to prepare the horses and guns for the next day’s Proclamation Salute, a process that normally takes 100 hours. This preparation involved taking all the polish off the leather with wire wool until a smooth surface was revealed, and brand new polish was then applied.

Once the new polish had been worked in, the soldiers attached a hook to their belts to pull the leather taut then used strips of old ceremonial uniform to produce a deep shine; a process known in King’s Troop as “bliffing”.

“It takes hours to get that deep shine,” Capt Cooper said. “They’ll just keep doing it until it’s to the correct standard.”

The horses’ harness and leather work is inspected by the Commanding Officer and double-checked by the Master Saddler, Warrant Officer Class 2 Godfrey Morris, currently the longest serving member of King’s Troop. Stitching is checked for damage and to ensure all equipment is safe to be used.

Meanwhile, Capt Cooper’s role is to inspect the guns, which will have been meticulously cleaned, including the use of toothpicks to get in between the tiny crevices.

“I will check all parts of the gun with a white glove to make sure it is absolutely spotless,” she said. The horses are “salute groomed”, which comprises a bath followed by a rub down with hot cloths to produce a lustrous shine in their coats.

King’s Troop’s own farriers then had just one night to hand-make all of the horse shoes for the processional horses, with every horseshoe stamped with “ER”. The specially designed metal shoes, called “cork and wedge”, are shaped downwards at the ends to stop the horses slipping. The farriers had to produce 40 cork and wedge shoes overnight (including one spare shoe for each horse).